Can we lay off Dolly already? 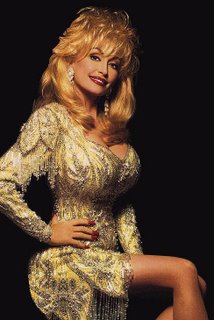 I got on PeaceBang about this at her site, but it is far from just her who is being snide about Dolly Parton this year. (And this post should not be taken as a response to PB, more a rant in general.) The snotty essay in the Washington Post made fun of her, too.

The last straw for me was the E online coverage called her "Best Visual effect," writing "Sure, the Kong guys won the award, but we were left stunned by how lifelike Dolly Parton appeared."

Oh har de freakin' har. I'm sorry, the woman turned down a "Natural Woman" award from Jane Magazine because she said she wasn't a natural woman and didn't want to be photographed as one. I think that we all get that she wears a lot of makeup, has had some work done and that she is delightfully, unabashedly, redneck.

If we're all done showing how sophisticated we are by making fun of her, I'd like to review the reasons Dolly Parton kicks ass:

-She took Jane Fonda on a bus trip through Appalachia and made her eat possum. Somebody had to.

-She started and funds a kickass charity called Imagination Library that sends poor kids a new book every month for their first five years.

-She's a gay icon. (As Shakespere's Sister put it, "Ever been to a drag show without a Dolly?") But she doesn't feel the need to deny the rumors she's a lesbian. The people making fun of her should be so sophisticated.

-She's been married to the same guy for four decades. He's never in the spotlight because he apparently doesn't want to be. If it's ever an issue between them, Dolly hasn't told us because it's none of our business.

-When she gets an idea from another, younger, singer, she tells the world. She credited Norah Jones with her recent decision to go with more piano work.

-She can't even bring herself to say something mean about Jolene This is like when Jackie O refused to invite Arthur Miller to a state dinner because he had publically mistreated Marilyn Monroe. It's that level of respect for and kindness toward other women.

-She has her own Muppet, Polly Darton

-She produced a documentary about the AIDS quilt, she wrote 9 to 5, she doesn't lie about her age, she's told the world that she admired the way the town prostitute dressed back home in Locust Grove and still dresses like her today.

-She sung a cover of "Stairway to Heaven."

I love how Dolly is super country but not in that ignorant, scary KKK sort of way. Even the black people I know who hate country music think Dolly is great. The woman emanates open-heartedness. She still "acts" like she's a poor girl from a small town, and that's what is so great: she's not ashamed of who she is, and she shouldn't be because she's a good person.

I'm big fan of Dolly, and have been ever since she left Porter Wagoner. She's one of the most underrated entertainers I'm aware of.

Oops, I should clarify that I don't mean to say that Dolly is an exception for being a super country person who isn't ignorant - but she is one of the few, positive, mainstream images we have of someone who is pretty darn country. Unfortunately, southerners are poorly depicted in most things.

Oh, lighten up. I said I loved her.
She puts herself out there as an over-the-top creation, she's gonna get a ribbing. EVERYONE loves Dolly. She laughs at herself and the world laughs with her. It has nothing to do with wanting to seem sophisticated. Good god.

Again, PB, I wasn't particularly directing it at you.

And if the guy in the Washington Post who started his Oscar story: "Seductive plush pile, the color of rare filet -- it's a carpet no sane person would ever install in a house but everyone has secret dreams of traversing..." wasn't trying awfully hard to be sophisticated, I'll eat my hat.

I just think that cracking up at/with Dolly is something she invites, as her own one-woman hootenany. I don't think it's about north/south class warfare. And don't you think that journalists generally try to sound sophisticated? Like Lisa Schwartzbaum, the pretentious film critic at Entertainment Weekly who makes every review sound like her master's thesis? But I digress.

"Every time I see something sagging, bagging, or dragging... I have it nipped, plucked, and tucked. It takes a lot of money to look this cheap!"

I'd much rather hear the mocking words out of Dolly's mouth than some snide reporter or snarky blogger.

Chances are... she will be able to do it 10 times better.

nay-sayers shouldn't lay off Dolly because it's borderline disrespectful to her... they should lay-off her because compared to her... they just plain suck at it.

Though I basically agree with Psyton, I will concede that:

a. It's fine to make fun of Dolly in your essay about the Oscars.

b. It's fine to be pretentious in your essay about the Oscars.

if we can concede that:

C. Doing both is a strong symptom of asshattery.