I'm still very much a humanist, but I'm a pretty open minded one who believes in metaphor, so part of my spiritual journey is listening to people whose beliefs differ radically from my own.  I was listening to a well-informed pagan talk about his faith this evening.  He said a lot of things that I'm still chewing over*, but what I think struck me the most was at the very beginning of what he had to say.

He talked about ritual having to be in a safe space.

'There is no safe space,' that voice in the back of my head, one that seems neither still nor small, insisted.

I knew what he meant, intellectually at least.  But my instinctive response doesn't seem entirely inaccurate either.

A lot of what white people have been figuring out over the last ten years or so is that the places that seem the most safe to us are still dangerous to people of color.  I can't speak to that, I can say that having my spouse "out" as a transgendered person has brought home how safety out on society exists on a bunch of levels.  Legal protections can't prevent the actions of people willing to break the law, or even the petty-but-not-illegal humiliations that a depressing number of people are capable of.

bell hooks even observed "“The practice of love offers no place of safety. We risk loss, hurt, pain. We risk being acted upon by forces outside our control.”

There is no safety, not really.

In a pagan circle we can, a few dozen people in a room, declare a safe space, but don't we on some level know it to be otherwise.

Pagans aren't the only ones who demand safe places for our religious practices, of course.  The Hunchback of Notre Dame's Esmerelda demanded sanctuary in the cathedral and they gave it to her.  In a metaphoric sense, we might go to a congregation looking for a place in the world that lets us be with ourselves without the distractions of modern life bugging us, at least for the hour between 11:00am and noon.  (Sanctuary from the modern world is something I have never known myself to want.  But I know other people do.)

Ultimately Esmerelda left the cathedral.  Noon comes, and even the most quiet-loving congregant has to go back out in the world.  The safe physical spaces are always temporary.

So what about a safe space?

The best I can do for a safe space is to have one in your own head, and maybe in times of ritual or other deep spiritual connection entertain the idea of letting someone else in.  That in itself is a tall order. But maybe there's something to be said for noticing the times, rare in my case, where one does feel truly safe, drinking that in and keeping it.

I can't say I have a better idea. 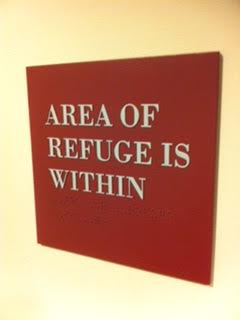 
*I love the idea of a sort of ritual that lets you safely practice a situation that gives you difficulty in regular life, forcing you to respond to it a different way, for example.  I am something of an introspection nerd and have a long list of such situations I could work on.

I don't think "introspection nerd" and "obsessive narcissist" are the same thing, though one could probably make a good argument that the are.
Posted by Chalicechick at 7/26/2016 11:23:00 PM 1 comment:

Totall UU inside baseball: A layperson has questions and opinions on ableism

I've had a couple of discussions about the ableism, and ableist language, issue where I've been varying degrees of welcome due to my being a layperson who isn't actually in this conversation.  I've actually talked about this a lot with a lot of ministers, though, and if an outside view is helpful, here you go. (If it's not, I assume you didn't click on the post.)

Obviously, these questions come from a point of view, because pending more facts, I think I've come to one:

- When I was a kid in the 1980's and "retard' was the playground insult of choice, even MY PARENTS (not known for political correctness, my dad doesn't believe in recycling) told me that nice people don't compare their friends to the mentally retarded.  It's just something decent people don't say.  The explanation, as I recall it, was something like: "The mentally retarded are often good people and they have difficult lives and the last thing they need is to be somebody's symbol or somebody's insult."

- Someone I talked about this with it hip to how comparing the spiritually unenlightened to the blind or the deaf is not OK, but is quite strident on the point of wanting use language implying, or spelling out, the superiority of those who can walk.  What's the difference there?

-Working on accessibility issues within our congregations is absolutely a higher priority.  But to me the argument of "we should be working on installing ramps rather than working on using different language" makes the opposite of sense.  If we're cleaning up our language, we're spending a lot of time thinking about how to be good to folks who have trouble walking.  In general, my impression is that meetings in non-accessible spaces don't happen because a meeting planner is like "MUAHAHAHA I will EXCLUDE the DISABLED." But because they don't think about it.  I have no idea why getting people to think about their language WOULDN'T get them thinking about the larger issues.

Is the concern that a minister will spend so much time thinking about improving their metaphors that they won't have TIME to ask for ramps, or what?

- Y'all do realize that the newbie minister at the center of this* isn't calling for the end of all metaphor, or even the end of all body metaphor?  She wrote on her public facebook page "Able bodies are some of the bodies, and as such, must be included in our liturgy. At the same time, they are not the only bodies. (More is possible.) In addition, the really important question is whether metaphors set up able bodies to be the best and disabled bodies to be the worst. (Our bodies are awesome.)"

- As I wrote here a lot in my blogging days, I think slippery slope arguments are inherently kind of dumb and the refuge of people who want to paint dramatic fictional situations to hide their lack of facts.  But my objection has, shockingly, not lead the world to stop using them.  The slippery slope argument du jour seems to be "If we get rid of ableist metaphor, pretty soon we will have to get rid of ALL metaphor"

Oddly, I heard this same argument one time when I posted something on facebook about how writers really need to knock it off with the "comparing the skin tone of people of color to food and beverages" thing.  I had writer friends respond with horror at the idea of, I don't know, not being able to get across to their readers that a black woman is beautiful if they can't talk about her "cafe au lait skin" in exactly those cliched terms.**

But I can't believe that we didn't have those arguments back when the subject was "the superiority of white over dark" and "the superiority of the masculine and the feminine."  And metaphors about light and darkness and maleness and femaleness AREN'T entirely gone.  We're just more mindful about how we use them.  We do better.

Why are people so objecting to doing better here?

*FWIW, newbie lawyers do not start big arguments within bar associations.  So good on UUism for being a different sort of environment.  And I  really think the newbie minister's courage is to be commended.