One more on O'Keefe

I've been thinking about James O'Keefe and why it is that everybody looks so incriminating on his videos, yet nobody gets prosecuted when the situation is investigated.

It's because they go along.

We all do it. In the part of DC where my law school is, people coming up to you and yelling at you about their issue of choice is pretty much chronic. And do you argue? Of course not.

When a guy comes up to you and tells you how, say, the Army implanted a signaling device in his leg in Vietnam in 1978 and has been controlling his actions ever since,* you don't say "What motivation would the government have to do that?" You don't even say "We pulled out of Vietnam in 1975."

You just smile and nod, or furrow your eyebrows and nod in that specific case, act like you are interested in this person's drama and would help if you could because that's the quickest way to get someone like that to leave you alone.

Similarly, when I was a political fundraiser, I heard "I'm giving this to your candidate because his opponent wants to..." followed by some crazy rumor all the time. At that point, my job was not to evaluate the person's reasons for giving my candidate money, it was to take the money and smile and nod and validate their reasons for giving it.

So when James O'Keefe shows up dressed like a fratboy pimp wannabee says he wants advice on opening a prostitution ring that he has no apparent resources to open or well thought out plan for opening**, people (except for that one guy) don't think "oh, my gosh, this man is a threat to society" they think "how to I get this whackjob out of my office?" No ACORN staffer ever actually helped them at all. Some staffers actually gave them bad tax advice that would attract IRS attention. One staffer screwed around with them and claimed to have killed people herself.

Mostly, they smiled and nodded and went along.

And when O'Keefe called up Planned Parenthood and offered them a donation to be expressly used on aborting minority babies, the fundraising person thought "A donation's a donation" and took the money.

Nobody actually did anything wrong, but because smiling and nodding looks like agreement, they looked terrible on video and they all got fired.

I think one reason why this story bothered me, and keeps bothering me, as that I've dealt with this situation both as a fundraiser and as someone who is supposed to help the general public. I worked for a government agency at one point and I got all those calls all the time. I would patiently explain that if the Post Office was discriminating against them because they were Italian*** that they should call 888-EEO-USPS and speak with the Post Office's EEO officers, who were specifically tasked with dealing with that sort of complaint and could talk them through the process of filing a formal complaint that would get the Post Office's attention. I would say there was nothing anyone in my office could directly do to help them because USPS cases weren't in our jurisdiction. When they said, no, no, I had to help them because calling the EEO office never worked, I would ask if they had tried the Post Office's EEO office.

They would then ask to speak to my boss, who would listen to their complaints about how I was incompetent. He often then gave the call to the most shameless person in our office, the guy who liked to tell people they were describing the worst human rights violation he'd every heard and give them the number to the United Nations.

They loved that guy. My boss was, all things considered, very understanding about the fact that I kept trying to give them information that actually helped them, rather than being the sort of encouraging-but-unhelpful that they wanted to hear and that made them happy.

My weasel co-worker spent a lot less time on the phone. But if O'Keefe had ever called, he's the one who would have ended up on the video. Of course, I'm the one would would have taken the check from the crazy person as a fundraiser.

These days we really have to consider the O'Keefe factor, even in our churches. If a pregnant teenage girl comes to a UU minister and asks for help because her older boyfriend got her pregnant and she wants an abortion but feels like she can't tell her parents, we could be the next ones on the news accused of promoting child rape if we give her the help she's asking for. I honestly don't know if at this point I would advise people to smile and nod or to actually be helpful or what to do. In some jobs, just telling people what they want to hear is by far the best way to get through the day, but the person on the other end of the line could always be James O'Keefe.

* Actual claim made by guy on street to CC at one point.

** Oh, and most of the time he didn't even say that. In the transcript at the link, he is asking ACORN about the best way for his prostitute girlfriend to pay taxes. That's all, no prostitution ring even came up.

He should know by now that he's known for lying with video and on video. I'd like to think his shenanigans wouldn't have worked, but maybe a few of the people who believed the ACORN videos might have bought it.

Recording the cops during a traffic stop is obviously legal but it is nice that a judge agree.

Annnoying conversation I had recently.

"I hear you're having a sign-making party for John Stewart's "Rally to Restore Sanity," the lady at church whom I'd seen around but never met said.

"I'm thinking about it, but I'm trying to talk someone who lives closer in to having it." I said.

"Wouldn't it be wonderful if the church could sponsor a sign-making party or let people from out of town stay here for it?"

"Actually, I don't really think it would. I don't see this rally as problematic, but I'm worried that sign-making parties and lending the church to protesters would become a regular thing for liberal political rallies and I think that would be a bad trend for our church. I think we should leave the sign-making and such to individuals. But feel free to ask the minister about it. She might not agree with me." I said.

The woman hadn't been expecting to be disagreed with. It really took her aback.

"Oh, I'm sure people would understand that this is a different sort of rally."

"I perceive that this is a different sort of rally, but someone who is passionate about immigration who wants to hold an event for an immigration rally or some such would likely feel differently. It just seems like a bad precedent to set, but again, the minister might disagree. You should ask."

A few weeks ago, Chalicesseur TK wrote me a note suggesting that I write about these UUs who leave water in the desert for humanitarian reasons. They were recently tried for littering. As far as I can tell, they were guilty under the law as the law doesn't provide an exception for "humanitarian littering."

They got off on a technicality. I'm not going to cry about that.

While I'm sure that a legislator who is smarter than I am could craft an exception that lets one throw water bottle out one's window for humanitarian reasons, but would still cover littering, I don't see Arizona voters/legislators letting it become law.

I agree with the article that this is a bittersweet ending, at best.

One time, my brother got out of jail and Epilonious left a comment on this blog reading "Congratusorry."

That's about where I am. Congratusorry, Tuson UUs.

Sorry it has been an unofficial hiatus. I'm conflicted every time life gets busy because while leaving with no explanation seems rather rude, to me people who post something along the lines of "I'm cutting back on my blogging and feel the need to tell you so" every few weeks are worse. It always feels like people on BBses who would lose an argument, announce grandly that they were leaving and then be back to posting within days.

Of course, it is possible that I shouldn't worry so much about what people think of me, a criticism that has been made of me before. (The reverse criticism has, of course, also been made.)

Life goes on. TheCSO and LinguistFriend are well. Joe the Math guy is fine as far as I know, though we haven't talked in a bit. Cerulean and Forties Girl are having a kid, so I am planning my third baby shower. I owe you guys some seven postings on books I've read that I didn't expect to like. The annoying thing is, I've read the books. Expect a posting on Charlotte Bronte's "Villette" as soon as I can figure out how I felt about it.

Speaking of books, I hit what I like to think of as a "clutter event horizon" a few weeks ago and have been doing massive decluttering. If you live in my 'hood and would like some books, give me a topic and you can have any books on that topic I deem superfluous.

The new church year is starting and I'm back with my adorable and brilliant youth. I'm feeling optimistic about the direction of my church, even though I don't know what the direction of the church is yet exactly. I tend to be a fan of change within instutitions (except when they redecorate. I pretty much always hate that.) 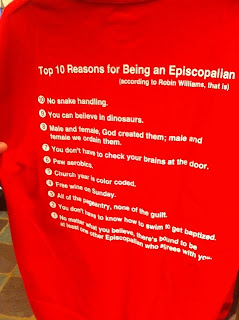