Happy Halloween from your pals at the Chaliceblog! 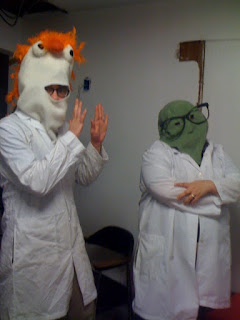 TheCSO and I are throwing a "Mad Science" themed party tonight. We're going to have lots of fruit, lots of alcohol and a juicer so people can "experiment" and make their own drinks.

We thought it would be fun to have several fondue pots going as well. But a good friend of ours keeps kosher and we're pretty sure she won't be able to eat a cheese fondue if other people have put meat in it, so we're looking for alternatives.


Both atheist Christopher Hitchens and pastor Douglas Wilson concur that
society has no use for Christianity if its core story is not true and
it's reduced merely to moral and ethical doctrine. But does this view
act as a challenge to 'religious humanism'?
__________

Hitchens discussed the role of religion in American society in the wake
of a recent study that shows the number of Americans who claim no
religious affiliation has roughly doubled in the past two decades, from
8.2 percent in 1990 to 15 percent in 2008.

The study, conducted by Trinity College in Hartford, Connecticut,
predicts that a full one-quarter of Americans will have no religious
affiliation by 2028. The study notes that the number of non-believers
among younger people is considerably higher than among older people,
suggesting that the trend of Americans growing less religious will
continue in coming years.

Hitchens said Americans are increasingly turning against organized
religion "because they want to push back against theocracy and the
parties of God and the awful challenge they pose to us internationally."

"By the way, your side seems to be winning in public schools, at least
across America," host Gretchen Carlson told Hitchens.

Hitchens appeared on Fox with pastor Douglas Wilson, who appeared along
with Hitchens in the recent documentary Collision, which explores the
battle of ideas between the religious and the non-religious.

The two came to unexpected agreement on one issue: They both attacked
the notion, popular among some secular thinkers, that Christianity is a
socially positive thing even if it's not true.

"If Jesus didn't come back from the dead, then Christianity is appalling
-- it's an appalling fraud and delusion and every unbeliever should
attack it," Wilson said. "Christianity is not good for the world because
it makes people decent and sober and that sort of thing. At the end of
the day, if it's not true -- if it's not objectively true -- then I
don't have any more use for it than Christopher does."

Hitchens echoed that idea, but made it clear he does actually consider
Christianity a fraud.

"They say, well the Bible story's not really true -- they're morality
tales. Don't listen to it, because if it's based on a fraud, if the
virgin birth and the resurrection and the miracles did not occur --
which they did not -- then those teachings are immoral, they teach that
sins can be forgiven by throwing them on to a scapegoat -- a positively
wicked doctrine."


Is it just me, or does this argument not make a lot of sense?

Admittedly, I was raised by liberal Christian parents who taught me that the less-believable parts of the bible were metaphor. Though the article and the guy who forward it to the list attribute this idea to secular thinkers, I hear it a lot more from liberal Christians than I hear it from secular folks.

To me, the idea that a religious story's meaning and value should be evaluated separately from its literal truth makes perfect sense and I'm not sure why anything else would be the case. After all, Jesus himself acknowledged that not all of his stories were literally true. If inventing a story to get a spiritual point across was good wnough for Jesus, one would think it would be good enough for the Reverend Wilson.

People who angrily storm out of churches

But rarely has a church been exited with the verbal panache displayed by Screenwriter and Movie Director Paul Haggis who writes a two-page letter so succinct and thoughtful to the leaders of the church of Scientology that it is frankly amazing that it came from the same dude who wrote "Million Dollar Baby."

Oh, and for the record

You can add calling Michelle Malkin a "mashed up meatbag with lipstick" to the ongoing list of reasons why Keith Olbermann creeps me out.
Posted by Chalicechick at 10/15/2009 06:37:00 PM 4 comments:

Sometimes I ask myself "Self, why did you move out of Louisiana?"

Actually, I never ask that.

Lots of people snark on Roman Polanski and his defenders, but only Calvin Trillin does it in such witty verse.
Posted by Chalicechick at 10/14/2009 04:52:00 PM 3 comments:

From The Washington City Paper's Column The Sexist

Possibly not work safe, at the very least a quick glance might make your coworkers think you're tacky. 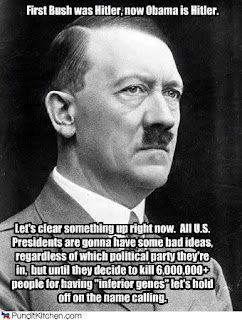 I initially suspected this was a hoax

After all, it kinda looks photoshopped.

But no, Liu Bolin is a real dude who camouflages himself. He's been written up in the London telegraph for example.