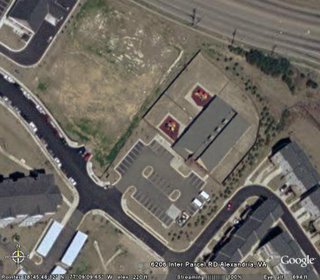 Here's another reason why the "kid with a clean record tried to murder a cop* to avoid getting charged with a misdemeanor that typically lands one a month in rehab" scenario doesn't work.

The layout of the IHOP parking lot.

Here's what I think happened:

Kids run out of restaurant to car. Cop (who has worked there for a bit and knows the layout of the parking lot is a figure eight)thinks to self "If I chase them, they will drive around me. I'll cut them off!" so he runs to the only exit from the parking lot and stands in the way. The kids don't even see him until the last minute. (It's nighttime and he's around a corner from almost all of the parking spaces.) The driver finally sees him swerves to AVOID the cop. Cop really does fear for his life and shoots at the car out of desperation, but only because he's a moron and put himself in the situation because he was trying to be a cowboy.

(Consider that six people got into that SUV. The parking lot isn't that big. If the cop had been just chasing them, he would surely have gotten to the car before the slowest of six kids could pile in.)

So, yeah, it's possible that the cop is telling the truth.

But it still leaves me wishing stupidity could be a crime so we could charge him.