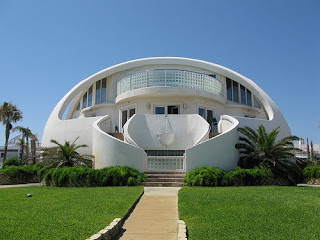 I've been off-and-on rereading Ayn Rand's The Fountainhead recently. It's a very strange book that does some odd things to make its points. The one that gets me the most is a newspaper columnist who writes about architecture who is a fairly recent college graduate and the daughter of a partner in a famous architecture firm but is widely regarded as both an expert and an impartial judge of architecture for reasons I haven't grasped yet. Also, she spends much of the book with the theory that the foolish public would never, ever accept what is essentially modern architecture. (Though she thinks it's great.) The Fountainhead is set at a time when modern architecture was still a fairly new thing in America, but had been thriving in Europe for decades, which one would think even a reviewer fresh out of college would have known, to say nothing of an expert. And the book was written in the forties, when modern architecture was pretty well established even in America. And of course, the style she is so certain the public could never accept, or one very much like it, became the dominant architectural style for the rest of the century.

I get that we're supposed to see the folks who like modern architecture as visionaries that are ahead of their time, but the sheer pervasiveness of modern architecture by even the time the book was written serves to make the characters who say it's never going anywhere come off as crazy* (or at least a little stupid) to my reading, though I get that they're not supposed to.

But one of the things I can appreciate about the book is that everyone is tremendously passionate about architecture one way or another in an unrealistic but at least fairly logical way.

I would not say that I'm passionate on the subject, but I know a little bit about it because the history of architecture tracks art history to some degree, also I tend to hang around with engineers.

Anyway, I really enjoy when some website throws together a long list of cool-looking buildings around the world, and a few that are just plain funny-looking. The only one of these I've ever actually been to is one of the less cool ones, the Luxor Hotel and Casino in Las Vegas.

So go, look, enjoy, and feel free to clue me in about what's going on with the Fountainhead, if only to tell me to improve my willing suspension of disbelief.

*She believes that greatness, such as the main character's architecture, is doomed to fail and will be destroyed by the 'collectivist' masses around them. So she feels she has to destroy him herself so he will be destroyed by someone who loves him, since his destruction is inevitable. I have known a couple of women who let love make them so incredibly axe crazy that they might well have found this logic acceptable, but it just seems so silly given the subsequent ubiquity of modern architecture.
Posted by Chalicechick at 11/10/2008 11:27:00 AM

I read this practically before the last century. Well, not quite that long ago. I recall being uncomfortable with my sense that Rand felt herself vastly superior to us stupid peasants who didn't agree with her.

the thing I noticed in the Rand books (and I think I read them all) was that her heroes are super competent and her villains are super evil, but any ordinary people who are real characters end up committing suicide.
She really couldn't deal with reality.

Agreed with both anonymous and kim.

I actually went through the stereotypical period of Rand fandom when I was a sophomore in high school. You should watch out for anyone who is still an Ayn Rand fan by the age of 30.

However, it might help you put the book into context if you remember that Rand first began writing the novel in 1935, and was not talking just about "modern architecture" (which could be thought to encompass the Soviet style she loathed and sort of refers to at the end of the book when "modern architecture" has become accepted), but probably about organic architecture specifically.

Well, I'm sure anyone 30+ who likes Ayn Rand AND the Chaliceblog is OK.

Anyway, I did think of that PG. A lot of Roark's architecture is organic-sounding, though some of it really sounds pretty classic modernist.

But that is a good point and one that does explain at least part of the issue.

As an architecture major, I can tell you that in the 1930's both the "organic" architecture of Frank Lloyd Wright and the "International Style" of the Bauhaus and Le Corbusier were still extremely avant garde and edgy, and not yet assimilated into mainstream culture.

It was only after WWII, when the US was the last capitalist country left standing, and all the chic German tastemakers had emigrated here, and the cost of building with traditional methods and materials became prohibitive, that "modern" design gained wide cultural acceptance.

(I don't remember Rand being too specific about the exact aesthetic qualities of Roark's work. However, I do remember that his personal idiosyncracies and megalomania bore an uncanny similarity to Wright's.)

But a novel about a late 1940's rock critic who loved an Elvis Presley equivilent, but felt she had to destroy him because the public would never accept his genius and, indeed, would destory him themselves because something like Rock and Roll was too edgy to EVER catch on...

Ok, actually that sounds like an awesome novel, but it still makes the critic come off as completely nuts.

I don't know what modern architecture looked like in the 1940's, maybe Rand's decisions were reasonable. But Dominique comes off as crazy and not at all good at her job because she so completely misjudged where architecture was going when she was supposed to be an architecture critic.