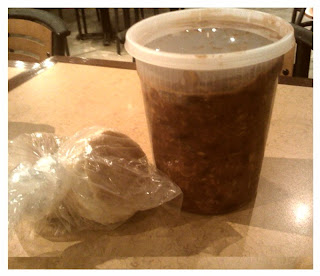 Chili and biscuits is traditional. I think it started at the Kerry election, when theCSO went to work as a poll worker even though he was really sick. I brought him chili for dinner. Since then, I've brought him chili every time he works the polls.

I'm so charmed that he's a poll worker every election. It makes me feel snuggly inside. I'm a sucker for a guy with a sense of civic responsibility.

It was fun to bring him his chili and kiss him hello. He said that the turnout has been immense, even though there were so many absentee voters.

In other news, Ralph Nader and Joe the Plumber are clearly having some sort of contest to see who can be the biggest chode.

Working the polls is fascinating, and a long haul. My honey brought me lots of Starbucks, and it was good.

I've been doing the big scroll down from the top of your blog and loving it (the kitty is an awesome visual), nodding with your remarks about Libby Dole going down, and this just got a big LOL from me.

Because I don't really know what "chode" means, mostly. But I love it.