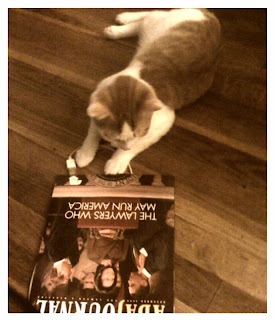 I am now camped out in front of my TV and intend to remain here until I have to go get theCSO from his precinct. As you can see from the photo, Dr. Frank-n-furter is running my research department.

8:33 I have real mixed feelings about Christopher Shays losing in Connecticut, which the exit polls say he will do by a large margin. Radley Balko says of Shays "Shays has a reputation for being “thoughtful” because he makes a public show of agonizing over big, important votes before casting them. Then, almost without fail, he ends up voting the wrong way."

I get that, but at the same time I really liked having some liberal Republicans around and he struck me as a fundamentally good guy.

8:50 Forgot to mention, Liddy Dole is going down in North Carolina. Wahoo! Remind me to tell you about the time in my reporter days I gotcha'd her. It was awesome.

8:54 I had the chance to go to some of the big election watch parties and decided to stay home and blog instead. I am 90 percent OK with that decision. But as I watch the black church in Atlanta singing a Dresden Amen as civil rights leader Andrew Young is saying "This is a victory of faith over fear, grace over greed, and vision over violence," I kinda wish I were there.
Posted by Chalicechick at 11/04/2008 08:27:00 PM

Awww, you shoulda gone to the party and live it up for all your friends with small chilnerds who have to stay home. We have to vicariously live through you.