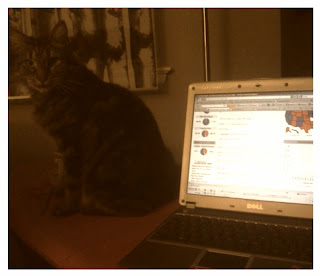 9:55 IMHO, it's over. Congrats, President Obama. FWIW, he's ahead in the popular vote now.

10:01 Katie Couric is now talking about the race in the past tense. (And she's not wearing pinstripes.)

10:28 CBS just went to Howard University, DC's traditionally black University, where at least hundreds if not thousands of students are cheering and crying and now I'm crying a little too. This is so awesome.

11:23 I didn't like the beginning of McCain's speech, where he talked about race. But the later part of the speech still seems fine.

Honestly, I've been weepy since CBS showed the students at Howard.

McCain gave a good speech, focusing on Unity. For awhile, I could see the guy whose hand I shook that time.

Students from George Washington University are gathered outside the White House, jumping around and cheering.
Posted by Chalicechick at 11/04/2008 09:50:00 PM

Ok, I have to say I never really understood the point of liveblogging until today. It's great to read your "story".