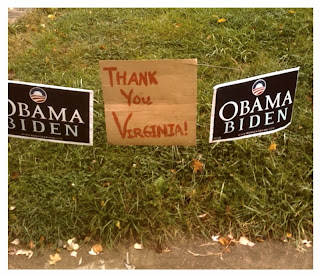 Biden was right. Obama will be tested soon... it will be vicious, brutal, and on video; perhapes over a period of weeks (I remember months of the Iranian hostage crisis very well).

Obama and Biden will be taunted about being helpless to do anything about it.

How UU's react to Obama's response is going to be interesting to see.

Be aware though... we are in for some real testing. Biden was certainly aware and you can bet they are working the scenarios every day... in fear of looking soft in the face of a brutal foe.

Liberalim's in for a reality check and it will never be the same after Obama.

I'm amazed that he seems to have won North Carolina and narrowly missed winning Missouri. I thought I'd never live to see the day.

Charolette NC is big banking center and the people took a big it with the finanical meltdown. Polls turned after Lehman bros bankruptcy.

Good to know your alternative reality is still fully in place, Bill.

Biden predicted the crisis. I think he's right. There are some out in the world itching to prove while Obama's color may be different, it's the same old Great Satan; plus they think Obama's a bit of a chump.

Biden gave us an insight that Obama and he are preparing for it and I suspect the response is going to be severe.

Obama and Biden will spend the next four years in fear of tomorrow's terror attack and the GOP's charge in the aftermath that it was Obama who left America vulnerable.

Toss in Blagojevich's almost certain indictment (Vrdolyak just copped a plea; Bill "The Pope" Cellini just indicted) and there is going to be plenty of dirt clinging to Obama's pants legs from Illinos...

Blagojvich almost chanted, Tony Rezko wrote the judge Sen Obama and I did nothing wrong five times at a press conf two weeks ago.

Obama's going into this sure to come crisis, with a looming cloud over him, and it's going to cripple him soon.

And then he names a player like Rahm Emanuel too boot as COS.

Chicago coming with a vengence to the White House.

Jess... the tests are starting... and this from a fairly predictable guy who detests us...

Wait until some American gets their head lopped off on video and Obama taunted that he's helpless....

The harsh tone and repeated attacks on the United States the day after Democrat Barack Obama's electoral victory surprised some observers who had expected a more liberal style and more detail on how Russia would tackle a financial crisis.

"To neutralize -- if necessary -- the (U.S.) anti-missile system, an Iskander missile system will be deployed in the Kaliningrad region," Medvedev said, referring to a Russian enclave bordering European Union members Poland and Lithuania.

Obama and Biden will spend the next four years in fear of tomorrow's terror attack and the GOP's charge in the aftermath that it was Obama who left America vulnerable.

Um, the way Bush did after 9/11? The way any sensible U.s. president has to fear tomorrow's terror attack? Or does your alternative reality now feature a President Bush who didn't justify everything, from the wiretapping of U.S. soldiers overseas to the detainment of 15-year-old boys at Gitmo, under the heading "It's preventing another 9/11"?

Incidentally, bill, you've been promising all year that some big revelation about Obama would come out of Rezko's trial. Before, you were saying it would torpedo his election. But I'm still waiting...

Incidentally, bill, Obama isn't president yet -- the test from Russia is still of Bush. Remember him?

Bill, I always read your comments with a mental "Dah... dah... daaaaaaaaahhhhhh....." playing in the background.

The time for spreading fear for fear's sake has come to an end. Hope won this one, and definitively so.

Medvedev and Putin are sending signals to Obama for sure... don't doubt that.

Bush is as lame as a lame Duck can get now... one reason why it's so opportune to test Obama and America.

Raham not my favorite Dem but he was right here on meet the press. I just wish he had had the courage to stand by these words from 2005 until now for I don't think he's changed his minds.

In January 2005, when asked by Meet the Press's Tim Russert whether he would have voted to authorize the war-"knowing that there are no weapons of mass destruction"-Emanuel answered yes. (He didn't take office until after the vote.) "I still believe that getting rid of Saddam Hussein was the right thing to do, okay?" he added.

Spreading fear? Clinton convinced me to fear SH and I was fearful thant Bush 1 / Powell didn't finish the job. And I voted for Gore / Lieberman in the hope they would...

...I'm guessing Obama / Biden share RE's feelings here and glad they at least don't have SH to worry about...

And that thanks will become more public over time.

Bush is as lame as a lame Duck can get now... one reason why it's so opportune to test Obama and America.

Bush I put boots on the ground in Somalia after losing in 1992, leaving a mess from which Clinton had to extract himself painfully. Lame ducks are still Commander in Chief. Your historical memory seems to be constrained to Chicago politics.

If the premise of your vote for Gore was the hope that he would invade Iraq, I find your system of picking a candidate pretty bizarre, because he certainly gave no indication that he wanted to invade Iraq. Not that what politicians say on the campaign trail is a perfect predictor, given Bush II's mockery of "nation-building" when he ran in 2000.

Clinton's 1998 speech on Iraq to the Joint Chiefs.

This speech was a turning point for me.

Here's the link to the Russert interview and a quote per Russert from Rahm's 2003 campaign in support of Bush and invasion... words I suspect will be hearing in some different context again,

MR. RUSSERT: This is the way Democrats are talking in 2005. But back when they were voting for the war, and three-fourths of both houses of Congress voted to authorize the president to go to war, as a candidate you said you would. And in March of 2003, Congressman Emanuel, your tone was strikingly different. This is what you said.

"I had the fortunate experience of serving in the White House; I knew firsthand what a solitary and difficult decision it is for a President to send our Armed Forces into harm's way. I will remember some of the members of this body, in the midst of conflict, attacking the President--the commander-in-chief-- even even as he worked day-and-night to complete that mission and bring our servicemen and women home safely. It was wrong then. It would be wrong now. I, for one, will not do that to our President ... to our commander-in-chief. I want him to succeed. We should all want him to succeed. So as long as our troops [are] engaged, we should suspend the debate over how and why, focus on the mission, unite as a country, in prayer and resolve, hope for a speedy resolution of this war with a minimum of loss. God bless America."

That's far different than what you're saying today, criticizing the president.

I was a proud Liberal Democrat back in 2003... a supporter of ex-Prez Clinton, and Rahm... now...who's reality has changed here?

I stayed focused and Rahm went political although never buying the bamboozled line. At least he had that integrity.