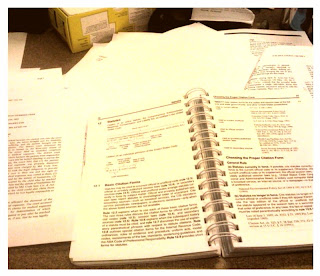 Good news and bad on the research front. I found a perfectly on-point case--in Oklahoma. Also, it's against us.

I stopped by the associate's office to tell her and she said she didn't think there was any way that opposing counsel would find the case I found. I beamed at the implicit compliment to my research skills and went back to work. I will write my memo now.

And Nate Silver reminds us to ignore exit polls.