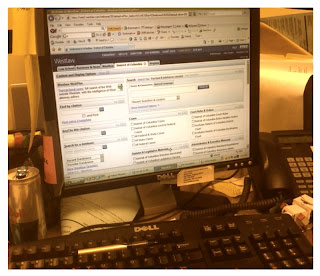 One of the associates gave me a difficult research task on a DC case*. I've done the initial research and found that there isn't much on point, but I decided to do it again before I wrote my memorandum to that effect.

As I was working on it, I said out loud, "Damn it! I can't find anything on point."

One of the secretaries looked up "What does 'on point' mean?" she asked.

I walked over to her desk and gave her the five minute talk on the common law, using Scott V. Shephard** as a basis for explaining how the laws on the books don't always give the fairest result and judges need to improvise, then these improvisations become part of the way that area of law is decided.

She did a nice job of faking interest and her responses indicated she understood my explanation. She will be a good paralegal someday if she wants to be.

Then we both got back to work.

Wonkette has New Yorkers talking about lines around the block, but my secretary said that she voted within about 15 minutes this morning.

*Most research tasks on DC cases are fairly difficult as it is a city, not a state, and thus has correspondingly less caselaw. The courts often follow Maryland, but I always spend lots of time trying to find a DC case anyway.

**A prankster tossed a lit firework into a market. It was quickly thrown away to another person and another, and it ended by exploding in the plaintiff’s face.

Even though the prankster wasn't the last to touch the firework, he was liable.
The guy who actually threw the firework at the plaintiff was just trying to get a lit firework away from himself and was not liable.

I find this is a good case for explaining the common law as it is a wacky enough situation that people easily believe that the laws on the books wouldn't quite be equipped to handle it, particularly given that it happened in the 1700s.
Posted by Chalicechick at 11/04/2008 09:17:00 AM

Adn I got to your blog from your email signature. I'm not a creepy stalker, I swear.

I very rarely write about work.

But on this day, it wasn't avoidable.