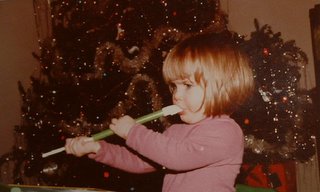 (New readers: The CSO and I bought my parents' house. They left most of their stuff when they moved.)

Anyhow, in the middle of a bunch of stuff, I found a letter from one of my brothers' former lawyers, who was pulling out of some trial or another, that describes Oliver as a "memorable client."

I told TheCSO tonight and that struck us as hilarious for some reason.

Oh and I found a really cute picture of CC as a little kid.

When do we get to see a picture of you?

Me???? I'm not very photogenic, plus I have no idea how to get one onto the computer.
I think we have some of our wedding pictures on one of the computers -- how would I get it here?

p.s. to kim: I always think of CC as looking like her blogspot icon - maybe I lack imagination, but it works for me!