Jeezum crow, it looks like Caligula had dinner here. 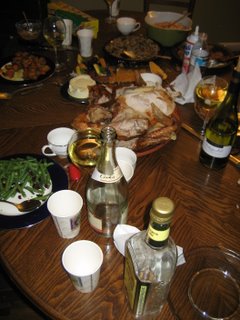 Turkey-Excellent. Grass-fed is absolutely the way to go. Most tender and moist turkey I've ever had.
Steamed Green Beans garnished with dried cranberries- Delish. I'm going to make those every year.
Sweet Potatoes brushed with olive oil and curry powder--a little heavy with the reast of the meal. I think next year I'll just do a second steamed veggie.
Cranberry mousse-OK, but I didn't stir it enough or it settled oddly. Either way, it had this weird layered thing going on.
Ambrosia-Perfect, but theChaliceRelative's ambrosia always is. (It's all citrus and coconut, none of that weird marshmellow stuff.)
Jambalaya stuffing-The Chalicemom's specialty.
Fruit tart from Wegmans--Really good.
Pumpkin pie-Proved how unevenly our small oven cooks. But still, it was my first pumpkin pie, and I made the crust too, so that the biggest problem it had was uneven cooking speaks well for next time.

Once I had everything on the table, I said "So, we've got coke, diet coke, cranberry juice, water, skim milk, chardonnay and ginger ale. But I'm going to have a gin gimlet."

"I'll take a gimlet," the Chalicerelative calls out.

My father also grunts his assent.

So I make the drinks and try mine. It's...um...non-alcoholic.

Crooking an eyebrow at my brother Jason, who has made my liquor disappear before, I go sniff the gin bottle, which has been half full for awhile. I'm usually a whiskey drinker in the winter, I'd just run out of whiskey last week and not bought any more. But the gin bottle absolutely no longer contains gin. At some point over the last few months, my gin has been stolen and replaced with water.

Bet that didn't happen at your Thanksgiving.

CC
who suspects Chalicesseurs are hip enough to know that a Gin Gimlet made with water instead of gin is basically really strong limeade, so the drinks were still pretty good, but jeez...

No, when my gin bottle was empty it wasn't my brother who'd replaced it with water, but my son! Sigh. He was 10. Now he's 40, he doesn't drink at all - doesn't like it - so maybe he made himself sick! Happy Thanksgiving for the long way things sometimes turn out.

Your brother stole your booze and replaced it with water?! I thought that only happened in the movies! (And usually kids to parents.) I wonder if my kids will stay my booze someday ....

I'm a vodka gimlet drinker myself... although most of us stuck to red wine on T'giving.