Could someone explain this to CC? 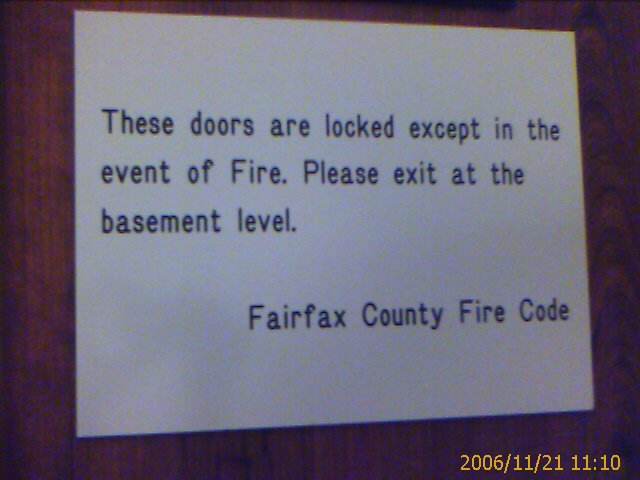 Thus, you must take the elevator if you want to go upstairs.

According to this sign, fire regulations require this. But that doesn't make any sense to me.

Let's say there's a fire on the third floor. Somebody on the fifth floor tries to evacuate. He heads down thr stairs, but two floors below there's a fire. All the doors above him are locked. Now this guy is stuck in the stairwell where I'm guessing he's far more likely to die from the smoke.

Why would fire regulations ALLOW such a thing, to say nothing of requiring it?

What am I missing?

two things:
1. the doors unlock in case of a fire (these doors are locked EXCEPT)
2. the stairwells usually don't have any flammable material in them (by law, this is why you aren't allowed to store old boxes in the bottom of stairwells) and have fire-proof doors, so fire, by design, is not allowed easily into stairwells.

Most of these stairwells also usually have fire-alarms next to the doors so that if there is a fire and you need to get out... you unlock the door by pulling the alarm and also call the fire department and alert the rest of the building.

yup. epilonious has got it.

I work in occupational safety. Now... fire doors are not required, in my state anyways, to lock behind you. Your building probably does that to assure nothing gets stored in them.

In the event of a fire alarm. Which can happen in one of two ways, when a pull station is in fact pulled, or in the event that the automatic sprinkler system looses pressure (this happens when the heat of a fire sets off the system - they have little melty things in them)

In those cases the locks would automatically fail! Sisnce locks on fire doors are required to fail in a Safe (in this case unlocked) mode. The doors would then be available to everyone.

This is why it is really important that if you flee a building because of an incident, and the alarm has not sounded, that you pull the pull station yourself.

In addition to fleeing the building and pulling the fire alarm switch, it is IMPERATIVE that you immediately call 911. This means you, personally, whoever is reading these words right here. My senior year, a dormitory caught fire and NOBODY CALLED THE FIRE DEPARTMENT because they thought that pulling the fire alarm (the red lever thing) called 911 automatically. It doesn't always work that way--sometimes it just activates a siren that warns the building's residents.

Just some more in the PSA department.