First, they came for the ninjas. 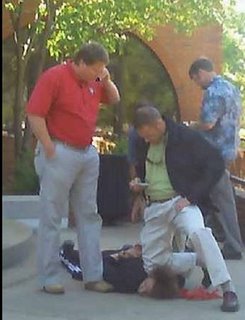 It's very easy to make fun of this story, where ATF agents randomly jumped a guy dressed as a ninja who was coming home from a costume party. Usually, I confine criticisms of the police to incidents with the county police local to me. This one was federal agents and in Georgia, but I found it so egregious that I wanted to write about it anyway.

One of the agents commented:Seeing someone with something across the face, from a federal standpoint — that’s not right

Note how she manages to justify jumping someone solely for his choice of attire AND imply that there's something wrong with the fact that local police might not have done so.

There is a point to me doing this, you know. While ninjas aren't under attack in everybody's community, there are certainly a lot of unjustified police killings in mine. (By which I mean two. But two, within a few months in one county is too many.) And, of course, you see petitions every Sunday that no one will read all about national politics.

As far as I can tell, nobody cares what happens locally.

But locally is where you can make change, and locally is where your voice is most loudly heard. "Stop domestic wiretapping!" is a nearly pointless cry. "I think our County police could use a citizens' review board. What are the channels I would need to go through to set one up?" are words that might well do some actual good.

If you are all about telling your national government what to do on issues of security, but you don't have a clue what your local cops are up to, you're wasting your chance to make real change.

I strongly suspect that it comes down to the fact that in national politics, merely having an opinion and signing a petition makes one feel like an activist. With local stuff, you really do have to work at it. (And admittedly, I haven't done anything on my police shootings, either, though I'm working up to it.)

*P.S. In the Culosi case, it has now been three months since the shooting and the results of the internal investigation have not been released. (The ballistics tests are done. How long does it take to interview a bunch of people?) The family has announced they are going to sue. Good for them.
Posted by Chalicechick at 4/14/2006 07:16:00 AM

This is a lot like ticketing someone for using the left lane as a travel lane. There are VERY strict laws against walking around on a public street with a mask on. These laws were enacted as anti-Klan laws during the civil rights era; however, they just say no masks in public period.

And technically the left lane is not for going slower than the normal speed of traffic, so in many states you actually can be ticketed for driving the speed limit in the left lane on a road where most people speed. That doesn't make it particularly reasonable to vigorously enforce the law as such either.

Uh, looks to me like throwing a guy to the ground and sitting on his neck for using the left lane as a travel lane.

The article said nothing about him fighting back and I'm pretty certain the ATF folks would have mentioned it.