I am torn between being disgusted by this, and wanting to work for this guy. 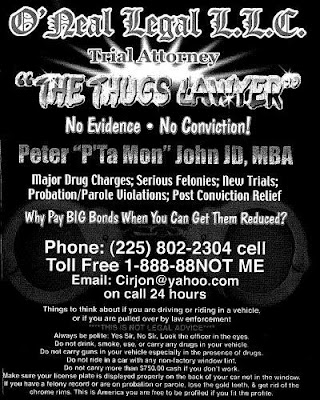 Hat tip to Above the law

Labels: Law and such

Oh, the Above the Law reading begins... CC is becoming a law student ;-)

His ad looks like an album cover, but it's not a far cry from "I know an accountant who can get you ...." that I hear from very respectable people.

I bet he doesn't charge as much as a lawyer who - I heard this third hand, from the DH, who heard it from the guy who hired the lawyer - can make traffic violations "disappear" for several hundred bucks an hour.

The guy the DH was talking to worked on a Bill Gates project and was intrigued because this lawyer had been retained by Gates for a while.

Apparently, the guy the DH spoke to was very satisfied with the lawyer's services. He'd had something like 80 speeding tickets and parking violations "dimissed" over the last couple of years. My favorite was how he got out of a citation for parking in a handicapped spot. The post the handicapped parking sign was attached to didn't meet "code." It was too high or too low or some such thing.

The phone number alone is full of awesomes.

No evidence. No restraining order. . .

If you are innocent, and can demonstrate reasonable doubt in a court of law, you don`t really need a lawyer.