CC thinks about pain as she eats hibachi food. 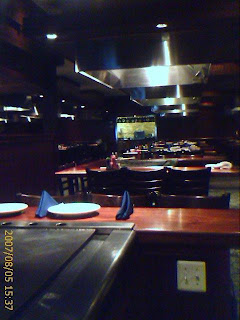 A friend of mine, who happens to be into S&M, told me once that she wondered if we were conditioned at children to find pain bad and if we were taught as children not to fear pain if we would see it as a good thing.

I, for one, thought that was nuts.

I get the occaisional migraine headache and I imagine myself lying happily on the bed in darkness, savoring the sensation of a spike being driven in behind my eye, and I find that a little hard to believe.

Though migraine headaches strike me as the yellow jackets of the ailment world, awful and entirely without benefit, most pain does serve a purpose, essentially as the body's way of saying "hey, cut that out!"

I found myself thinking of my friend and her claim today in the hibachi restaurant. There was a family with two children over at the next grill table. Their hibachi chef began his routine the same way all Hibachi chefs begin, by slathering a thick squirt of oil across the grill and set it afire, sending
flames leaping three feet high across the grill.

The smallest kid, who was about three, let out a squeal that shook the restaurant. The older kid leaned back, but didn't make a sound.

Of course, it's possible the little kid's parents were inveterate campers or had a lot of candles around and the kid had learned to fear big fires. But I was more inclined to believe there was something instinctive there.

Some fears are certainly learned. My guess it there aren't a lot of upper middle class people who fear the police as I do.
But I think some fears are inborn.

Also, one would think that if fears came from cultural conditioning, it would work the other way and positive feelings would come from it too. To some degree, that's true. But every cultural cue exists than clowns are happy and fun, yet I've known several people, notably my sister in law, who found clowns scary as children. (Indeed, BoingBoing did a bit on Sesame Street routines that scared people as kids and got many entries.)

So that's what I'm thinking about...

I remember a comedian saying "Isn't it funny how our tastes change as we get older? For example, when I was a kid I hated getting spanked..."

I cannot believe that pain and pleasure are social constructs. The paths to them can be- the hoops we have to jump through to attract the opposite sex, for example, are usually artificial social things- but the sex drive isn't.

I agree with Joel, CC. I think pain is a warning to us, not a fun time. If we enjoy it, I think there's been some wonky wiring.

I think your friend is off the mark, watching my own kids I know we never had to teach them aversion to pain. Teething and general bumps and bruises were plenty of examples of their natural reaction.

But to play devil's advocate. I worked many mornings as a breakfast cook. Stumbling around half asleep surrounded by surfaces at 350 was enough to acquaint me with a certain aspect of pain. Pain does heighten awareness and sensation which helped prevent further injury on the job. Usually though I did get my morning "wake me up" burn. I suspect that it is this aspect of pain that your friend is taking advantage of. Basically using pain as a stimulant to give the body a "natural" high.

I don't think pain is a natural human response and I can't see that it ever would be confused as pleasurable.

However, if we are raised in painful circumstances, pain can be confused with pleasure. Or should I say, we can be so comfortable with our own discomfort that we cease to put ourselves out of our comfort zones and stick with misery. Seeking happiness, to many people, is an exercise requiring a total quantum leap in thinking and unfortunately many people aren't willing to step outside the familiar, even if it is dysfunctional.

I met a woman not long ago whose idea of fliration was to be the biggest, most confrontational bitch imaginable. If you shot back at her, then she perceived this as this weird sadomasochistic fliration. It creeped me out, but apparently she derived this sort of perverse pleasure from her background, which had included an abusive relationship in which she was routinely beaten up and verbally assaulted by a boyfriend.

What I learned in some anthropology class was that we are born with a fear of falling and a fear of loud noises. That's it. Just because other fears come later doesn't necessarily mean they aren't natural. We are not really mature when we are born, compared to other animals.
I think what pain is for, is to make you avoid whatever caused it. And sometimes that gets perverted. A class I took once said that sexual perversions, such as S&M, well, they're not sure what they come from, but they think that some very intense experience was associated with pain, and it is the intensity that people are trying to reproduce....

Fear can be unlearned, you can be conditioned against it. What does that mean?

Please can we stop trotting out the "anyone who finds something fun that i don't understand must have had a traumatic past where their signals got screwed up" story?

Try to be original, at least?

((Fear can be unlearned, you can be conditioned against it. What does that mean?)))

Fear of some things can be unlearned.

I'm not sure what you're saying, though. When you were a kid, did someone have to teach to be afraid of, say, stubbing your toe or getting stung by a bee? I'm quite certain I picked up that those were sensations to be avoided all on my own.

Lots of fears that are unlearned are unlearned at great difficulty and expense, and in extreme cases, that's a good thing. If you're afraid to leave the house, yeah, I can see spending thousands of dollars and lots of time to get over it.

But most fears, such as fear of pain, are good for us and help us out.

Lepers lose the ability to feel pain, thus don't fear pain, and sometimes get severe burns because they don't notice they've left their hand on a hot stove.

The "to what degree is what we like sexually related to difficulties of our pasts and indeed our overall psychological makeup," is an old argument, and one we won't settle on theChaliceblog.

A lot of psychologists believe it to be true. The anecdotal evidence I have of the general self-esteem level of the S+M fans I've known, and my own observations of the fluctuations of my interest in that sort of thing and their relationship to how I'm thinking about myself lead me to think there is a correllation there, but I've been wrong about things before.

But suffice to say, people don't posit the idea that there is an S+M/Screwedupedness relationship because they think it is an original thing to say, they posit it because it is to their observation true.