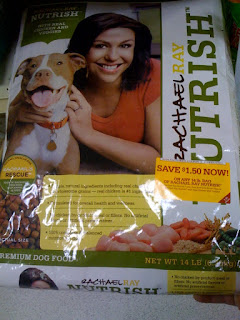 I guess that must be something of an "in joke" because I just don't get it. Of course this sign of the U*U Apocalypse is a bit of an "in joke" too in more ways than one. ;-)

Shrg. It's celebrity-branded dog food. You don't think it's weird on its face that we need even our dog food to be celebrity approved and endorsed these days.

It makes it somewhat weirder that if you googled Rachel Ray, you would discover she's even a celebrity chef. But one of the things I've learned running the Chaliceblog is that most people don't Google for curiosity's sake, so I can't say most of my other readers would have looked it up either.

I have an opposite tack: I know lots and lots of bloggers/podcasters with an irrational hatred of Rachel Ray.

Then again, my mother dislikes the Cesar Milan celebrity dog food (which makes more sense because he's a celebrity dog trainer) because the 'pumpkin whitefish' flavor was The Only Dog Food at the tiny nearby store one time... and it stunk up the house for 3 days. (To be fair, the dogs loved it.)

I think celebrity endorsements for goods and services that are actually in the celebrity's field of expertise are different from what CC posted. E.g., I might take Rachel Ray's advice on a brand of mac & cheese, because she certainly seems to make a lot of variations on it, so hopefully has an idea of what tastes good. However, I have no reason to think Ray has any special expertise in what dogs like or what is good for their health. Similarly, Tiger Woods might know which brand of golf balls is best, so his Titleist endorsement counts for something. But why should I consider him to have any particular expertise in which consulting firm is best? Accenture never should have hired him in the first place. Of course, the kind of people whom I might trust to know which big consulting firms are best, are business people and possibly government officials whose faces are not recognizable to the public.

I can definitely see how Rachel Ray can be annoying, but from what I've read of her rise to fame, she is a friggin workhorse and certainly "paid her dues" (whatever that ever means). So I don't get the hate. But the constant chitchatter is grating.

I think the hate comes from people who find her manner annoying and who also dislike her food. I don't hate Rachel Ray, but I don't think she's enough of a good chef that I'd be taking her advice on anything more sophisticated than mac'n'cheese.

I noticed the handsome Pit Bull before Rachel Ray.

Yeah, I was happy to see that. Pits need all the good press they can get.