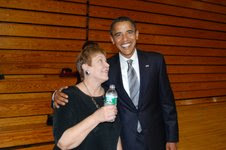 I intended to post this like a month ago, but I forgot. Jana-who-Creates' parents were up visiting for Thanksgiving and we had dinner with them and Joe-the-Math-Guy, who came to visit us. It went really well and I even tried giblet gravy because that's the kind of good sport I am.

I had hosted a brunch that morning for their family and my family, which went well enough though I was a total mess for the entire time my brothers and my best friend's parents were in the same house as I was fairly certain Oliver would break out the social views he picked up in prison and I really wanted Jana's parents to think I was OK. Friendship is like dating in a lot of ways, though thank goodness the standards are lower.

They liked me fine, but theCSO was the really big hit, which is often the case.

Anyway, here's Jana's Mama with Obama. (I had to say it again.)