In Washington we build temples to great men and their ideas. 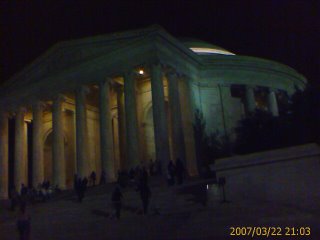 CC, there are more tunes coming from you these days than lyrics. i.e., the pix are nice, but I miss your tangy comments on life.
Fondly,
Ms. Kitty

The picture is of the Jefferson Memorial.

Duly noted. I will try to get back into writing more. I'm just really busy.

I wonder why Washington seems to be the only great man who is commemorated without a statue of him. (I guess the Washington heads all over the GW campus make up for the lack of his image at the Monument. I hate those heads. The first time I was in the GW area, I assumed there was just one of them and tried to use it as a marker to find my way around.

L'Enfant wanted a large equestrian statue of Washington over by Jefferson pier, but Washington hated the idea and wouldn't let him put one up.