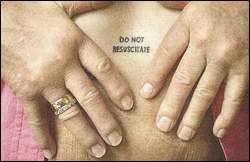 One of my lifetime ambitions is to someday be a really cool old lady. That said, i don't think any amount of hipness I might achieve could rival
this woman, who has gone and gotten her DNR order tattoeed on her sternum.

From the article:
"She's always been a maverick," said her daughter, Mary Pat Wohlford-Wessels, assistant dean of the medical school at Des Moines University.

Wohlford-Wessels said she failed to talk her mother out of getting the tattoo.

"She said, 'Remember all those times when you were a teenager, and I said don't do this, that or the other thing? Paybacks are tough, aren't they?' "

Wohlford has no regrets about getting her tattoo "it felt kind of like a bee sting" and proposed an offer to Lietz, the shop owner.

"I told Gary I'd bring a busload of old ladies over if he'd give me a 10 percent cut."

I have never been, nor will I ever be, that spiffy.