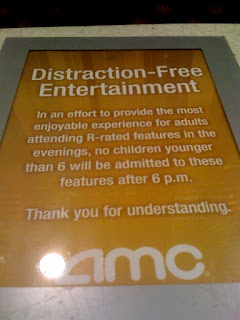 I'm OK with the teenagers, if I were to vote for an expansion of the policy, I would want it to be to include PG-13 movies. Listening to a little kid's hysterics during "King Kong" and listening to a Dad trying to calm a traumatized kid during "The Lovely Bones" were the two worst theater experiences I've had and both those movies were PG-13 midnight shows.

Kids at evening shows is one of the things that makes me love Netflix. Good for AMC

That sounds like a great idea. Seriously, children under 6 at R-rated movies? I don't think they should be allowed in EVER. Wait for the DVD, bad parents. A former classmate told me about the time he went to see "Monster's Ball," late in the evening, and there was a dad there with his two, preschool aged children. I haven't seen the movie, but according to my friend, one of the first scenes is of someone having sex with a prostitute. The dad sat right through that. It wasn't until someone died and his daughter started bawling that he finally took the kids out. The only thing we could think of was that he meant to see "Monster's, Inc?"

Is there any particular reason why you are suppressing my recent comments CC? Even those that don't even mention U*Uism, such as the comment I submitted earlier to this post?

Presumably these were the two worst theater experiences the traumatized kids had undergone too.

Presumably these were the two worst theater experiences the traumatized kids had undergone too.

(((ven those that don't even mention U*Uism, such as the comment I submitted earlier to this post?)))

My inbox received this comment at 6:55 and your other one at both 6:58 and 7:00. If you submitted your other comments first, your beef is with blogger and not with me.

Because I sometimes approve comments from my phone and that process is not without problems, I do sometimes miss comments for a few hours or even a day or two, but this has happened to Joel, Hafidha and PG at least as often as it has happened to you. Indeed, when I went to look for versions of your comment from before 6:55, I found one of Desmond's that was like a day old.

As for those kids' worst theater experiences, how would I know?
If their parents are taking them to one midnight show, whose to say they haven't taken them to others?

many people don't seem to know how to be parents. Perhaps they had no good role models?