Wouldn't it be cool if nurses still wore the little hats? 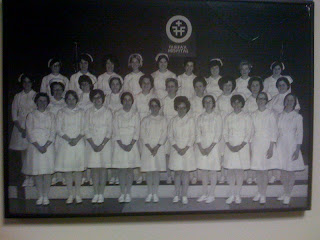 I think I've worn that uniform before.

When I was called on to help in my dad's office I had no white outfits. So mom dove into her closet and that's when we found out that her uniform from the sixties fit me like a glove. It probably still does.

Thankfully there was no hat with it, I think I would have felt really dorky.

That picture looks an awful lot like our dental hygiene class graduation picture. I still have the hat somewhere. We had to wear them during clinic at the school, but I haven't worn it since.
But, as I discovered, there was a good reason to wear them in clinic:
One day I forgot my hat, and the WWII army surplus dental units had belt driven handpieces (the polisher thingy) and the belt grabbed a big chunk of my hair and pulled it out. left me bleeding. Made me appreciate the hats.

Ha! That's funny. TheCSO had the same thought. He pointed out that the hat very much lives on in sexy nurse costumes.

Well, it IS a cute outfit! ;-) He's right. The last time I was at a FFFleamarket, I saw more than a few of those outfits. ;-) Me, I'd probably rather have comfortable pants on, unless I'm dressing up fancy for a reason. (and that's usually normal dresses, unless people want to buy me fancy Renfaire garb. ;-)