So what DID CC end up doing with her weekend? 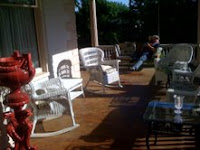 Will asked me a couple of days ago in the comments of my post on vacation sites for a girls' weekend.

Smiley Dave, ZombieKid and The Gnome were going to hang out with some friends of Smiley Dave's near Hershey Park, so Saturday we all drove up to Hershey Park and had an exhausting but very fun day where she learned that amusement parks are way more fun when one does not attend them with the ChaliceMom and ChaliceDad.

The Chaliceparents also maintained that nobody ever wins the carnival games at Amusement parks so we were never allowed to play them ever. I won a medium-sized stuffed monkey for theCSO on my third try at a two dollar game. (Yes, it was a monkey probably worth less than six bucks, but shut up.) Smiley Dave came away with a stuffed monkey AND this giant daisy.

Then Smiley Dave took the kids and headed to go hang out with his friends and Jana and I went up to Corning, NY. We were in the convertible and we could not have asked for better weather. We listened to Meg Barnhouse and Hairspray and the Indigo Girls and this goofy mix cd of songs I liked in college. Twas awesome.

We had the ultimate bed and breakfast experience in Corning here. Y'all, it's a Greek revival mansion that is full of beautiful antiques and run my two charming men whose moved to Corning from Seattle was primarily motivated by their love of Steuben glass. In fact, a discussion of Steuben glass with one of the guys enthused CC so much that she ALMOST dropped $250 on this small sculpture at the Corning Glass Museum's gift shop the following day before realizing that Steuben glass Victorian hand cooler collectors were really Hummel figurine collectors with more expensive educations. OK, I still kind of want the elephant, but again, shut up.

So we had this incredibly blissful time in Corning, so much so that she and I are already booked for next year at the Bed and Breakfast of the awesome, where they proudly display a signed photo of Eartha Kitt wishing the two guys luck on their business venture.

At the Corning glass museum, we went to these beginner glass classes and got totally enthused about bringing Smiley Dave, Zombie Kid and theGnome back next year, though the kids would need to stay someplace with less fragile surroundings.

I really love elephants, so I also love your Stueben glass sculpture and would have considered spending $250 on it. That is, until my husband says "You want to spend $250 on WHAT?"

So a good time was had by all. Egg-celent.