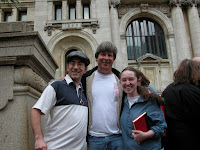 FortiesGirl, Dr.When, theCSO and I were a team in the first PostHunt, which was a competition where we ran around DC answering complex, multi-step puzzles. It was a lot of fun, though of the five puzzles we only completely solved one. We got a solid halfway on three others and were totally lost on the fifth. It was really, really, hard, y'all. (We missed one puzzle because we couldn't tell that a fortune cookie was coconut-flavored.) But at least half a dozen teams finished the whole thing, so it was us, not the puzzles.

TheCSO, FG and DW were really disappointed that we didn't do better, though I was more Zen about it because frankly these days I'm used to feeling like lots of people are smarter or at least better prepared than me and seeing things I can't. Thank you, Law school.

Anyway, I've been talking it up for the last two days and at least Jana-who-creates and Kate-the-lawyer are wanting to participate next year with their respective mates, so I don't think I'm going to have a problem getting a team together if they bail. Besides, if Jana is in, her kids are in and there's no way TheGnome would have missed the coconut.

I think the highlight of the day for FG and DW was getting to meet Dave Barry and I took this picture of them. (Dave Barry was really nice about posing for pictures and signing books.)

It was a good day.