Can I show you something awesome? 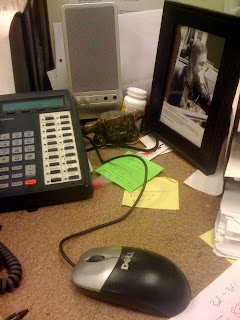 So ZombieKid made me a clay robot at Camp. Actually, theGnome made me some stuff too, remind me to take this post down before he's old enough to surf the internet unspervised as I would hate for him to run across my blatant favoritism for his brother's gift.

But ZombieKid's robot rocked my world. I freakin' love this robot and I've had it on my desk since the Monday morning after he gave it to me. I look at it all the time and smile.

Today, my boss goes sweeping through the office, carrying her lunch.

"Can I run something by you?" one of the secretaries asked her.

"Is it gory or disgusting or anything?" My boss asked in response. This is an extremely logical question in Workers' Comp.

"After lunch!" She said, gliding into her office.

I grabbed the robot and followed her.

"I guess you can show me something awesome," she said, taking a bite of salad.

"Check out this cool robot my best friend's nine-year-old made me."

"WOW!" She said "That is AWESOME. What a GREAT ROBOT!"

She's mom, so her standards are correspondingly odd, but I don't think she was humoring me. I'm a lucky girl to have such a robot.