A YRUU class we did recently that went really well 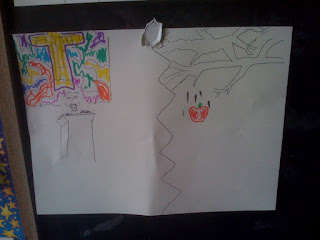 This year our church's spiffy youth ministry coordinator, TogetherBeth, has us working out of the "Building your Own Theology" curriculum and it has been going really well. We had an amazing class a week and a half ago that I meant to write about before theCSO's accident started taking up all my time and attention.

We gave the youth paper and markers and had them draw "How I saw God when I was a kid" and "How I see God now." It was pretty fascinating to see what people came up with.

In the interest of maintaining their privacy, I only photographed my own drawing, but several youth drew a God figure that was highly influence by the "buddy Jesus" from Dogma. There were lots of old men in the sky, of course. Conversely, a few people drew God as being scary.

As you can see, mine was a little different. When I was a kid, I knew from picture books that God had a beard. Now the only person I knew with a beard was Rev. Thompson, the associate pastor at my parents' church. And HE talked about what God wanted us to do all the time, as he stood at the pulpit in long flowing robes.

So at about four years of age, I was convinced that the Reverend Thompson was actually God. My parents denied this, so I remember thinking that Rev. Thompson was SECRETLY God, the way Bruce Wayne was SECRETLY Batman.

Obviously, I got over this at some point.

My "how I see God now" picture was of an apple falling, a reference to how I see Gravity as the most useful metaphor for God. Most of the youth saw God in either nature or the connections between people, though the majority of the group considered themselves theist in one sense or another. We talked about the differing ways people see God and and found a certain amount of common ground. It was interesting how we really didn't have much in the way of actual atheists in the group, though I did mention atheism and how an atheist can still appreciate some of the things theists see God in.

It was really neat stuff, y'all.

You've made TogetherBeth's day by calling her "together." Not an adjective I typically use to describe myself, but, hey, I'll take it. Thanks for the skit too! TogetherBeth is definitely NOT WriterBeth

Smile. I've thought of you as TogetherBeth for some time.